Despite Austria’s central and convenient location, it was never a place that was on my “must-visit” list. However, after an unexpected trip there, it came out on top as one of the most collectively beautiful and versatile countries I’ve seen in Europe.

What’s best about Austria is that it provides a combination of rich history paired with beautiful natural landscapes. There’s preserved castles, churches and buildings from as early as the eleventh century, significant landmarks from World War II and varying architectural styles ranging from Roman to Baroque to Gothic. All of this is set alongside Austria’s spectacular mountainous terrain.

There’s something for everyone in its cities, which I don’t believe you can say about most travel destinations. For the adventurous, there’s extreme sports such as parasailing and climbing. For the active, there’s countless mountain trails for hiking, skiing and mountain biking. For those interested in cultural experiences, each city has a meaningful history and is filled with churches, museums, castles and significant historical monuments. And, for those who aren’t interested in any of the above, there’s countless squares, rivers and outdoor cafes to sit and enjoy the beautiful ambiance.

As we were traveling to Switzerland and Germany, it was most convenient to stop in West Austria, visiting both Salzburg and Innsbruck, as opposed to Vienna further east. While I was most excited to see Salzburg, I was pleasantly surprised to find that Innsbruck, which I knew little about, went above and beyond my expectations. Salzburg, on the other hand, was too touristy for my liking – somewhere that I don’t have to go again.

That said, if you’re looking for a trip that has beautiful sights paired with cultural, historical and active experiences, Austria is the way to go!

Innsbruck: Before going to Innsbruck, I had little expectations and knew relatively nothing about it, which may be why it’s now one of my favorite places in Europe. It’s a smaller, less well-known city compared to Salzburg and Vienna, but that’s a good thing. It has a vibe similar to Boulder, Colorado in that it’s a chill, hip and active town with a major university in it and at the foot of impressive mountains – they key difference is just that it’s entrenched in Old European charm and was bombed during WWII.

Innsbruck is a sports capital in Europe, known for hosting two winter Olympics in 1964 and 1976. It’s located between high mountain terrain, thus providing an ideal location for hiking in the summer and skiing in the winter. However, what’s even better than the stunning mountainous landscape is that the city of Innsbruck is just as beautiful, which can be hard to come by in mountain towns.

The view of Innsbruck from the Inn River is one of the most beautiful cityscapes I’ve ever seen. As I’m an aficionado for colorful buildings, the sight of the pastel cookie-cutter homes alongside the river and against a mountainous backdrop cannot be beat. To my surprise, the city itself also exudes traditional European charm, which I didn’t expect given Innsbruck’s sporty reputation. It’s filled with many historical buildings and monuments, such as the Hofburg Imperial Palace, Innsbruck Cathedral, Goldenes Dachl (a famous golden roof) and dozens of notable churches, towers and museums. The Old Town in particular is home to charming squares filled with outdoor cafes, restaurants and sitting areas. I could have spent days sitting in the cafes and running alongside the river, but it’s hard to resist the views from the mountaintops. 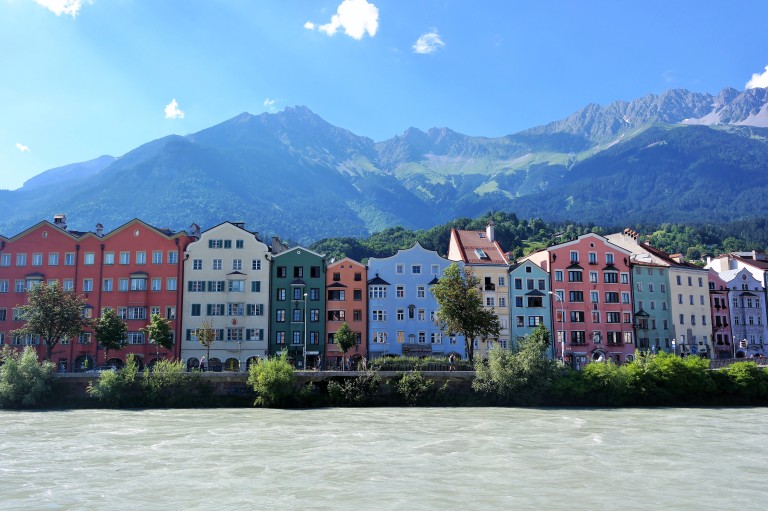 If you’re interested to go to the mountains (which is why most people go to Innsbruck) the main way is via the Nordkette panorama cable car, which transports visitors from the city to the mountains in just twenty minutes. On reaching the top at 2256m above sea level, there’s many walking and hiking trails varying in difficulty, as well as cafes and benches along the mountainside to sit and enjoy the views. You’ll see many parasailers from this viewpoint as well – many use the top of the Nordkette as their jumping off point. 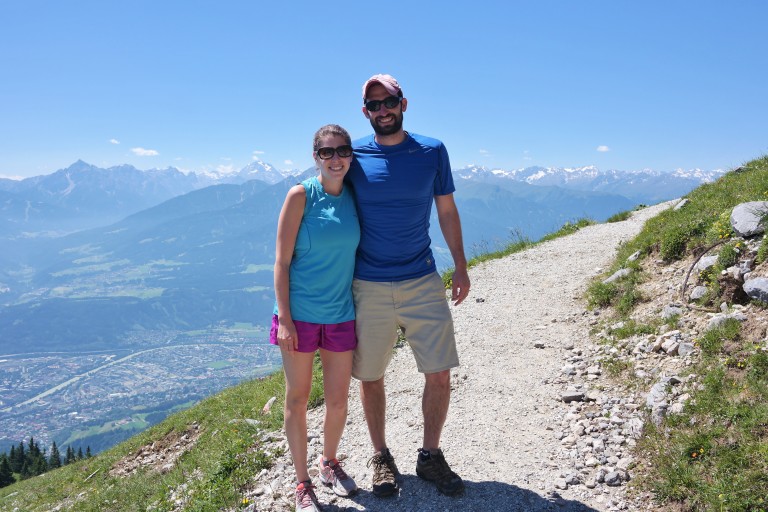 If you want to see another view, a second option is to take the Patscherkofelbahn cable car to the summit of the Patscherkofel at 2000m. Similarly to the top of the Nordkette, there’s many nice well-maintained hiking and walking trails starting at this point, with equally great views. We found this route to be less busy than the Nordkette but by no means were either of them crowded.

Salzburg: After hearing about the beauty of Salzburg over the past decade, it was one of the places I was most excited to see on our Eurotrip. However, I was sorely disappointed as the amount of tourists greatly overtook the beauty of the city. If you’re someone that likes visiting places off the beaten path, be warned that Salzburg is place at the center of the most trampled on path.

That said, the amount of tourists in the city clearly prove that it is a place worth seeing, but I’d argue it’s worth going only in the fall or winter to enjoy its beauty without tour groups.

If you take away the crowds, you’ll feel transported into the medieval times. Known for its baroque architecture, Salzburg sits on the Salzach River, surrounded by rolling hills, mountains and the beautiful Austrian countryside. Nearly half of Salzburg’s buildings were destroyed in World War II, however, the other half remain intact, making the city one of the few with a true Baroque style.

Throughout its Old Town, you’ll find dozens of churches, cathedrals and towers but the most notable is the Hohensalzburg Castle, the city’s fortress. Built in the eleventh century, it’s one of the oldest, largest and perhaps the most intimidating castles in Europe, as it sits on top of a small hill overlooking the city. It’s a small fee to go inside – only worth it if you’re interested in the views of the surrounding countryside.

Other notable activities and sights are Mozart’s birthplace and residence, the Mirabelle Palace and garden and the Sound of Music bus tour. Despite the popularity of these, however, we found the gardens to be very underwhelming and also heard mixed reviews about the Sound of Music tour, so I begrudgingly decided to skip it. There’s a host of other bus tours that are promoted around the city in addition to the popular Sound of Music tour; however, I suggest that you get a referral by a trusted source or look on TripAdvisor before deciding which one, if any, to choose. As Matt had an injury and couldn’t walk at the time, a bus tour sounded like a perfect choice for us, otherwise I’d be hesitant to recommend it as you can see most of the sights by foot.

The one bus tour that we later heard was worth doing is Eagle’s Nest, Hitler’s conference center built for the Third Reich. It’s built on top of a mountain summit in the Bavarian Alps, so a bus tour makes sense to see this. On the other hand, the Bavarian Mountains tour that we were recommended by our hotel that goes to a small, undefined lake is not. You can see how gung-ho I am on Salzburg, right?

All of this said, if you’re a history-buff, Salzburg is an ideal destination to see sights and architecture from the Roman Empire to the medieval times and through World War II. However, if you’re allergic to mass crowds like I am, stay away – at least during the summer.